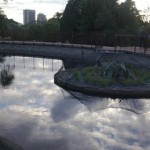 One of the positive things to come out of the decade- long drought in Southern Australia has been the development of some innovative water-saving plans. One of the most impressive is that of Melbourne’s Royal Botanic Gardens. Jane Canaway meets its senior designer, Andrew Laidlaw.

After being held in the fierce grip of drought for the best part of a decade, the “wasteful” sound of running water has become a distant memory in much of southern Australia.

In Melbourne’s Royal Botanic Gardens, the Fern Gully has been dry for many years, except after occasional rain, and visitors have grown used to ducks dabbling in muddy puddles where lakes used to be. However, a solution is in sight, and a key to its success lies in the recent re-awakening of a long-dormant volcano in the Gardens’ south-east corner. That landscaping project – completed this March – is stage one of a longer-term plan to create a sustainable water supply for the RBG, starting with approximately 68 megalitres of stormwater harvested from the nearby suburb of South Yarra. This water will enter the gardens through two stormwater pipes that will deliver the water into the Gardens’ lakes where it will be filtered on-site through a series of wetlands. This has the added benefit of removing 68 megalitres of diluted oil, dog faeces, salt and other pollutants washed from nearby streets that would normally run into the Yarra River.

In 1876 William Guilfoyle designed a reservoir in the shape of a bluestone-lined volcano that appeared to rise from the highest point of the Royal Botanic Gardens, with lawns created to mimic the lava flows between massed planting of shrubs, representing outcrops of land. For nearly 70 years it was filled with water from the Yarra River, which was then gravity fed to the rest of the gardens.

“It was possibly inspired by Guilfoyle’s plant collecting trips around the South Pacific,” senior designer Andrew Laidlaw said. “The Volcano was designed as a ‘Garden Folly’, a feature that visitors would come across in their meanderings around the gardens. “It holds 1.4 megalitres of water, which is enough for one cycle of our current irrigation.” However, Guilfoyle’s plan was plagued with many problems – including the loss of fresh water in the lower Yarra after waterfalls at Queens Street were blasted in 1879 to alleviate flooding and allow larger boats upstream. By the 1950s the irrigation system was attached to mains water and the volcano was locked up and slowly forgotten. Hidden by dense stands of olive trees, eucalypts and weeds, it was passed by generations of joggers and walkers without its being noticed – until a 1997 master plan called for its redevelopment.

Then drought hit. Toxic blue-green algae became a regular problem in the Gardens’ lakes, and mud flats were a common appearance in the Ornamental Lake – so a rescue plan seemed more appropriate than a simple redevelopment.

Laidlaw considers himself “very lucky” to be the one who landed the “plum job” of revitalising the feature – and he believes the timing was perfect, too. “If I’d been doing this five years ago we would probably have just done a pretty water feature, but now with the current water crisis it’s become an integral part of the Gardens’ water system,” he said. Along with Richard Barley, Peter Symes and Stephen Paterson, Laidlaw is part of a highly water-smart team that meant the RBG was one of the first Australian Botanic Gardens to develop an award- winning irrigation management plan that has been used overseas as a blueprint for other gardens.

While working on a revamped layout and drought-friendly plantings, Laidlaw consulted with both hydraulic and civil engineers about the possibility of filling the volcano with stormwater. “It was discovered that large amounts of stormwater from nearby suburbs was going straight into the Yarra [River] or to Albert Park and into the sea. Because stormwater hits the river fast it stirs it up and affects the flow rate, as well as carrying road rubbish and pollutants. By redirecting water through the gardens first, it reduces the water flow rate and cleans it. “The extra 68 megalitres is not enough to water the whole gardens but eventually, as part of stage 3, we hope to siphon off 120–150 megalitres of water required through a sewerage–water harvesting scheme,” Laidlaw said.

Becoming totally water-sufficient will be expensive, but Melbourne City Council wants all its parks off potable water-irrigation. Revamping the volcano cost $1.5 million and the next stage is to build the Working Wetlands in the Ornamental, Central and Nymphaea Lakes, which will cost about $2.5 million. Project Manager Stephen Paterson said tenders have been called for and it is hoped the 12-month project will start later this year.

Of the 68 megalitres captured, allowing for evaporation and overflow, “the modelling indicates we will be able to substitute about 40% of potable water with harvested stormwater,” Paterson said. The sewerage-harvesting scheme – if funding can be found for it – will cost at least $10 million. By contrast, water costs the gardens between $100,000 and $120,000 a year – and that is after spending $4 million on a new irrigation system in 1993, which has cut water use by more than half to 130 megalitres a year. “What’s exciting is we’ve got a whole new way of working with water that is environmentally friendly. And we’re actually bringing water to Fern Gully for the first time in years and bringing water to the parts of the garden that need reinvigorating. All based around the volcano.”

HOW IT WILL WORK

Two stormwater pipelines will be diverted to the RBG, carrying about 68 megalitres of water a year into the Ornamental Lake and a receiving wetland in Nymphaea Lake. The water goes through a gross pollutant trap to remove larger pieces of rubbish and sediments before flowing through a series of wetlands where less visible pollution is removed. Wetlands will be constructed in the Ornamental, Central and Nymphaea Lakes. The lake silt will be removed and clay used to line the area and build levees, creating pools of varying depths to hold the stormwater and selected wetland plants, which will grow in different depths of water. A bio-film of bacteria and fungi will grow on the large plant surface area and act as the engine of the wetland, removing nutrients from the water as it slowly flows through the wetland. Plants are also chosen for their ability to take up nutrients and top growth will be harvested and composted to remove the nutrients from the system.

Water from the Nymphaea Lake then flows through the Fern Gully – where waterfalls and mini rapids aerate the water – and into the Central and Ornamental lakes. Water will be circulated through the lakes and wetlands and pumped to the highest point in the Gardens, Guilfoyle’s Volcano. From this reservoir, garden beds on the Volcano slopes will be watered by sub-surface irrigation. The water will then flow back to the Nymphaea Lake and so will circulate through the wetlands; the whole cycle takes about 30 days. By pumping water from the deeper parts of the lake any layers of warm and cool water are mixed, which helps reduce the frequency and duration of Blue-Green algae blooms. Floating garden beds will be installed in the lakes and act as treatment wetlands, as the plants’ bio film-covered roots remove nutrients and improve the water quality.

British-born, schooled in Holland and Wales, I worked my journalism cadetship in the Home Counties, escaped to London, then spent a couple of years travelling before settling in Melbourne, where I have written and edited for a range of publications, including Pacific Magazines [Your Garden, Home Beautiful, New Idea] and Fairfax Community Newspapers. Now a mother of two wonderful teenagers, I write about gardening, sustainability and people, when I can drag myself away from the vegie patch and my saxophone.
Jane Canaway tagged this post with: Andrew Laidlaw, botanic gardens, Melbourne, volcano, water saving Read 55 articles by Jane Canaway