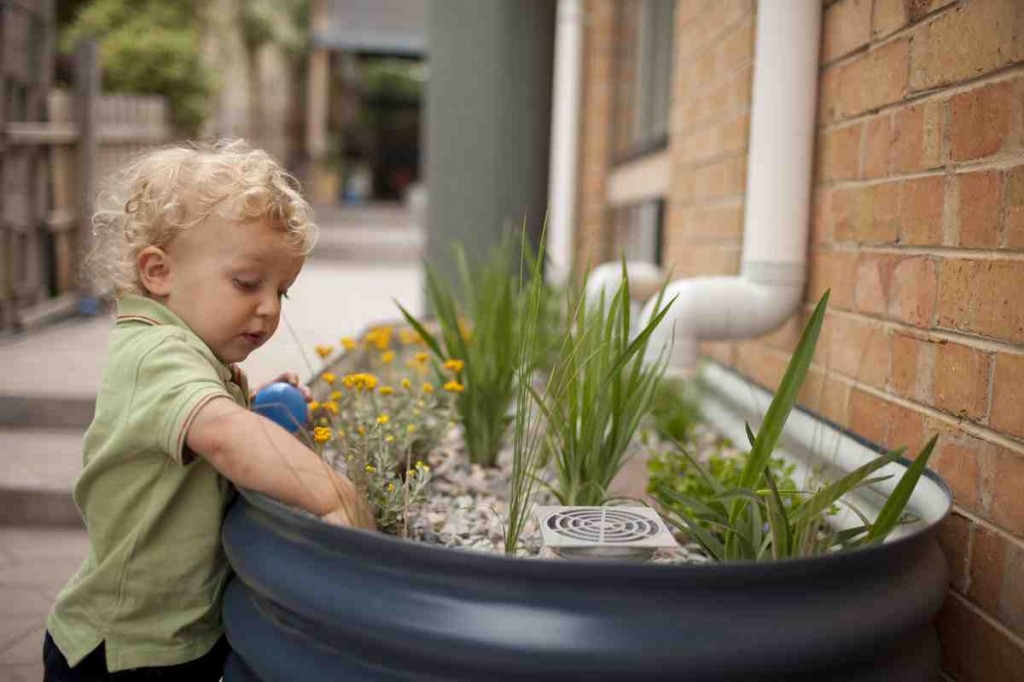 Imagine a way to reduce erosion and pollution in waterways and help water and fertilise your garden too. The solution might be as simple as disconnecting your home’s downpipes

and letting the water flow into an “ephemeral creek” – if you have a large enough block and the right soil.

For the rest of us, rather than risk flooding your garden and those of your neighbours, consider building a simple raingarden to capture and treat run-off before it hits the drains.

But don’t creeks and rivers need more water to stay healthy? The idea of reducing water flows might seem counter-intuitive, but the fast growth of Australia’s cities – and with it increased amounts of hard, impermeable surfaces – has resulted in waterways in urban areas across the country damaged by fast and too frequent stormwater flows and pollutants.

“The problem we have is the quantity and quality of stormwater flowing into our waterways,” says Phil Edwards, Melbourne Water’s team leader for stormwater quality.

“It flows into waterways too frequently, causing erosion; and the run-off from roofs and driveways also carries a degree of pollution and sediment, which is deposited in our waterways.”

Raingardens are designed to collect water from any hard surface – roads, driveways, footpaths or roofs – and to filter and clean it before it hits the nearest river. The filtering is largely done by the soil structure and microbes as well as through absorption by the roots of plants in the raingarden – a process called biofiltration.

As well as obvious pollutants such as oil, litter and animal faeces that are swept into stormwater drains from the street, dust, leaves and airborne pollution can also flow in from house roofs. Nitrogen and phosphorus are the main culprits, but the good news is that both are essential for plant growth. The goal is to feed raingarden plants rather than encourage algae in waterways.

Surprisingly, tiny amounts add up to make a huge difference even in large bodies of water. According to Phil Edwards, in 1999 Port Phillip Bay received 7000 tonnes of nitrogen – 1000 tonnes more than it is able to process. In Western Australia the Swan River has been hit by algal blooms and in NSW in July there were 11 “red” alerts for algal blooms in various waterways.

South-east Queensland has had an especially bad 12 months, with rains last summer washing high levels of pollutants into waterways.

Stormwater harvesting programs are being introduced in most major cities as planning departments adopt the principles of Water Sensitive Urban Design (WSUD).

“We’re looking at alternative technologies such as small-scale filters that can fit into urban streets,” says Edwards. “In all major cities you’ll see these appearing, built by local councils or water authorities.”

In Sydney more than 80 stormwater harvesting projects should save about two billion litres of water a year. The city of Orange has devised a scheme to supplement its drinking water supplies with stormwater. The scheme captures some of the high flows in Blackmans Swamp Creek during storms and transfers these into the nearby Suma Park Dam to augment the city’s bulk water supply.

At its simplest, a raingarden can be a swale or depression alongside a driveway or footpath, or even at a low point in your garden, where rainwater can collect and gradually soak into the soil. (Swales created close to buildings should be lined like a pond to avoid damage to the foundations.) We covered this style of raingarden in “Rainwater Gardens” in Sanctuary 4.

If you have installed rainwater tanks plumbed to your laundry, bathroom, or kitchen, you have already reduced the amount of water that’s going to the stormwater drain. Depending on the capacity of your tanks, during wetter months your tank may overflow. By absorbing and filtering the overflow water, raingardens can help ensure all or most of the water that falls on your home and garden remains on-site.

According to Anjali Brown, the Alternative Technology Association’s water projects manager, “Filtering the overflow from your tank into a raingarden will help you get the most out of the rainwater on your roof. Keep in mind, however, that a raingarden which only receives irrigation through overflow will need highly drought resistant plants. One way to provide more water to your raingarden in this situation is to divert your first flush device into the raingarden as well. A first flush device diverts the first flow of water from your roof, which may contain pollutants, away from your tank each time it rains. Usually the first flush water gets sent down the stormwater drain but by diverting it to the raingarden, your filtering plants will get a little extra water every time it rains which will help them survive.”

The best type of raingarden to work in conjunction with a water tank is a plant bed raingarden. Plant bed raingardens are either an above-ground planter box or an in-ground lined trench. Inside the plant beds are layers of gravel and sand that slow water flow, filtering out sediment and pollutants from the water as it passes through. The filtered stormwater is collected via a slotted drainage pipe at the bottom of the filtration bed, and can then be discharged into your garden or the stormwater system.

Raingardens should be planted out with species that are particularly good at removing pollutants, such as Lomandra longifolia or Carex appressa, and hardy, indigenous species that will survive the dry periods between rainfalls such as other Lomandra species and Dianella species.

It is important to remember that any run-off needs to be kept out of neighbouring properties and a registered plumber is needed to connect your raingarden back to the main stormwater drain. Some WSUD principles may clash with local council by-laws, while other councils may have incentive schemes that are worth registering with first, so check before you build.

Melbourne Water is campaigning to get 10,000 raingardens built across the city by 2013. Its website (www.melbournewater.com.au/ raingardens) has a range of information sheets about above- and in-ground raingardens, including the materials you will need to make them yourself, as well as which plants to select, and how to work out the size of raingarden you’ll need for your situation. These information sheets would be applicable to conditions around the country (though it would be best to seek local information about indigenous plantings).

If you would prefer an above-ground raingarden you may need to buy or make a lined raised garden bed or buy a water tank and have a drainage hole installed – see the details on the Melbourne Water site to find out the size of the drainage hole you need.

British-born, schooled in Holland and Wales, I worked my journalism cadetship in the Home Counties, escaped to London, then spent a couple of years travelling before settling in Melbourne, where I have written and edited for a range of publications, including Pacific Magazines [Your Garden, Home Beautiful, New Idea] and Fairfax Community Newspapers. Now a mother of two wonderful teenagers, I write about gardening, sustainability and people, when I can drag myself away from the vegie patch and my saxophone.
Jane Canaway tagged this post with: Melbourne Water, raingardens, stormwater, sustainable, water, water harvesting, water saving Read 55 articles by Jane Canaway