Permaculture meets capitalism in this man of the earth 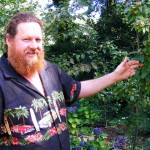 From his Blundstone boots to his wild and woolly beard, Peter Allen is unmistakably a man of the earth.

His connection to his land is evident as he walks around his hilltop home in the Dandenongs, pointing out hydrangeas that remain from when the land was a cut-flower farm, describing the huge areas he and wife Silvia have reclaimed from the grip of blackberries, explaining how the geese, chickens, sheep and llamas complement each other with their techniques of ‘mowing’ lawns or scratching out bugs, and how the milk cows were the ones to conquer one particularly dense area of scrubby weeds.

It is this complementary inter-connection of life on the land that fuels Pete’s passion and led to him giving up a stellar career in retail in order to spend his days farming and learning – then passing on that knowledge.

More than 800 fruit varieties grow on the 3 hectares he cultivates (another 3ha has been returned to bush) and he can name them all, then give you a potted history of each one’s heritage to boot. Silvia’s expertise lies more with the animals, but their skills overlap a fair amount , as visitors to their farm shop or market stalls soon discover.

“It was my mum who taught me to fix the brakes on the car… so there’s none of this girl’s job, boys’ job stuff, it’s just a matter of who’s better at it – and who’s there,” he says.

Pete’s parents moved to a hobby farm in the hills when he was nine, but they had always been keen gardeners, growing much of their own food and keeping poultry, just as their own parents had.

“I didn’t have a childhood, I had an apprenticeship,” he says, only half joking.

“I like to conserve the old stuff – I’ve got apples that probably comes from Roman times but also modern varieties like ‘Pink Lady’. I like heritage things but also useful things,” he explains, going to extol the virtues of the East Friesian and Finnish sheep he and wife Silvia keep.

It is hard to believe that, for 15 years of his life, ‘Pete the Permie’ was the epitome of corporate man, working his way up the Coles business ladder and managing dozens of stores across Victoria – many of which were originally opened by his father during his own career with Coles.

“By the time I left [Coles] in 2002 I had a company Statesman and was on a six-figure salary but I gave it away to do this,” he says, gesturing to the teaching complex alongside his century-old weatherboard home.

“This” started out as a lifestyle choice, living off the land as much as possible and running permaculture and other courses to pay for the extras. However, Pete and Silvia’s constant thirst for knowledge and their enthusiasm to pursue new skills has led to an ever-evolving set of enterprises and plans.

“I probably run about four micro-businesses now, which isn’t bad considering I retired with no plans to do anything,” he laughs.

As Pete explains his different income streams it becomes clear that, alongside Pete the Permie, who loves nothing more than spreading the love about organically grown produce and age-old agricultural wisdom, sits Pete the Capitalist, master of the spreadsheet and natural entrepreneur, who can’t resist an decent business opportunity when he sees one.

Pete and Silvia’s central businesses are still running courses – the subject list grows each year – and a plant nursery, where gardeners can find hundreds of varieties of apples, pears, plums and citrus, as well as “old-fashioned” fruits, such as medlars, crabapples, quinces, figs, mulberrries and persimmons, and semi-tropical exotics, including babaco and taro.

Business Number Three is a cidery business, producing Snake Gully cider and perry, which grew out of what he calls “sly grog workshops” and a need to use the many tonnes of windfall apples that were going to waste.

Finally is his consulting business, designing passive solar home solutions and garden layouts, as well as pre-purchase land assessments for those planning their own tree change.

Added to that is his involvement with Petty’s Orchard, where he has co-ordinated the open day and run grafting sessions for several years, and other groups, such as the Heritage Fruit Society. 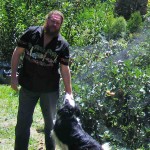 Then there is his writing: “English was my worst subject at school,“ he grins, loving the irony. “Now I’m paid to write for magazines and I’ve just released my first book, plus I’ve got about four more planned.”

Despite not enjoying school (“it was a bit regimental for me“), Pete’s overriding passion is for knowledge, and he reckons he has earned about 32 certificates on various subjects.

“I always had one night a week out studying – I didn’t know why I was studying all these weird things, they just appealed and Silvia was happy because she had one night a week on her own not listening to me,” he says. “Then when I did the permaculture class I realised it was all relevant to that, whether it was horticultural landscaping, meditation, accountancy or whatever.”

On his last trip to England, he bought about $3000 worth of books – mostly on apples and cider – and he has whole bookshelves dedicated to pet topics.

“Our trips are never really holidays, they have a theme – we spent nine weeks chasing around rare-breed farm parks in Europe and on another we did 50 cideries in four countries, including going to a festival that had been going for almost 2000 years in Spain.”

As well as making fruit wine, owning a still (he’s growing junipers to make gin soon), and producing 22 different dairy products, Pete was recently given a second-hand smokehouse, so his next project is teaming up with a local butcher to run courses such as A Pig In a Day and a preserving the harvest course.

“When I left work I had six different health issues, and I used to work 90 hours a week don’t stop for lunch or eat properly – now I probably do more hours but the physical side of it keeps me fitter – I’ve lost about 10kg. Of course with making cheese and wine I’m never going to be skinny but the exercise balances out the love of food!

“We might do seven days a week and six nights a week … but it’s what we want to do … there’s a lot of embodied energy in me having acquired this knowledge and I believe I’m bound to pass it on, so if I don’t have kids I have to pass in on in some other way.”

British-born, schooled in Holland and Wales, I worked my journalism cadetship in the Home Counties, escaped to London, then spent a couple of years travelling before settling in Melbourne, where I have written and edited for a range of publications, including Pacific Magazines [Your Garden, Home Beautiful, New Idea] and Fairfax Community Newspapers. Now a mother of two wonderful teenagers, I write about gardening, sustainability and people, when I can drag myself away from the vegie patch and my saxophone.
Jane Canaway tagged this post with: heritage fruit, Pete the Permie, Petty's Orchard Read 55 articles by Jane Canaway