Filed under people {no comments}

CHILDHOOD memories of standing in a forest, watching rally cars race past didn’t do much to inspire Molly Taylor. It was just what her parents did at weekends, but she preferred horses.

Then, at 15 and aspiring to L-plates, her father took Molly and her sister to his rally driving school for some off-road practice.

“I was pretty much hooked from then on,” the 22-year now admits. “It’s definitely an adrenalin rush and a challenge – being able to push a car to its limits is very addictive, but the atmosphere and people are fun, too.” 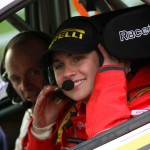 Two years later she raced in her first rally; another two years and she was competing in the Australian championships and late last year she was chosen as one of the six most promising young rally car drivers in the world and given a scholarship from Pirelli to join the FIA’s young driver program which, in 2011, will be integrated into the newly-created World Rally Championship Academy.

As well as the kudos, the place is worth about $185,000 in entry fees, fuel and tyres for her to race in six rounds of the World Championship, starting in Portugal this March.

Molly will be joined at the Academy by fellow Australian Brendan Reeves, 22, whose co-driver is his sister Rhianon Smyth. The other four drivers came from Ireland, the Czech Republic, Italy and Sweden.

In another family pairing, Taylor won her place in the Pirelli program with her mother as co-driver. Coral Taylor, who is a four-time Australian Rally Champion as co-driver to Neal Bates, teamed up with her daughter for the Citroen Racing Trophy, in which they claimed third, despite Molly being out of her comfort zone driving on tarmac.

For 2011, Molly will have a new co-driver: Rebecca Smart, 24, from Queensland’s Sunshine Coast, who was second outright last year in the Australian Rally Champions as co-driver to her brother Ryan. They also won the Kumho Tyres’ Future Champions Award.

“I am really excited to have Bec on board,” says Taylor.

“It will be great to have an all-girl team, but more importantly she is just as determined as I am with the same ambitions. We are both committed to focus 100% on this year in the WRC Academy.”

Smart agrees: “The WRC Academy is a once-in-a-lifetime opportunity and I’m definitely up for the challenge.”

While rallying is traditionally a male-dominated sport, Taylor says she has nothing but support.

“Rallying is very friendly – there is no face-to-face confrontation and people help each other out.

“It’s just that guys are more exposed to it and females don’t think they can get involved, but I haven’t met any resistance. If you take it seriously and get out there, then you’re taken seriously.”

To that end Taylor has become a competent mechanic and puts a lot of work into her physical fitness.

“Getting driving experience is difficult because the car is always being prepared, but I train myself to keep fit – running, cycling, cross training and doing weights. Drivers need be fit to cope with the heat – there’s no air conditioning – long days, and concentration.” 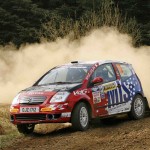 Competitions usually run over two or three days, driving from dawn to dusk in up to 10 stages, each anywhere from 8-30km long. Most are on gravel, but some are on tarmac.

Two years ago, Taylor moved to the UK to expose herself to wider competition.

She is now based in Cumbria, where she works for M-Sport – the company that prepares the Ford Fiesta R2s the academy teams will drive.

M-Sport also prepares Super 2000-specification Ford Fiestas, so she grabs some extra time behind the wheel test-driving cars before they are delivered.

“We have customers all over the world that we support with parts and technical information. I needed some way of paying rent, but to be able to do that in a motor sport environment is great; making contacts and learning stuff all the time is a win-win.”

While Taylor says she’s too busy to get homesick, she is pleased her sister Jane will be joining her in the UK this year. Jane has also won a scholarship but the similarities end there – she will be studying her Masters in Law at Oxford.

“We always say she’s the only white sheep in the family,” Taylor jokes.

She’s come a long way in the five years since getting her first car – an old Holden Gemini that she drove off the road in her first rally – and from school days when she would have to get someone from the local car club to sign her out of boarding school to compete in events.

“It’s ironic really; I chose that school because it had a really good equestrian program and I was competing in eventing: dressage, cross country and show jumping. But then I discovered driving and was always getting leave passes to do rallying events.

British-born, schooled in Holland and Wales, I worked my journalism cadetship in the Home Counties, escaped to London, then spent a couple of years travelling before settling in Melbourne, where I have written and edited for a range of publications, including Pacific Magazines [Your Garden, Home Beautiful, New Idea] and Fairfax Community Newspapers. Now a mother of two wonderful teenagers, I write about gardening, sustainability and people, when I can drag myself away from the vegie patch and my saxophone.
Jane Canaway tagged this post with: Molly Taylor, World Rally Championships Read 55 articles by Jane Canaway