Tripod Versus the Dragon

Filed under art and reviews {no comments} 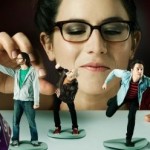 Tripod Versus the Dragon, live at the Forum

THE nerdometer was going off the scale as patrons filed into the Forum Theatre discussing probability curves and statistics.

Nerd nostalgia and pride are central to Tripod’s new show; it’s a musical homage to the original role-playing game that developed a huge cult following – Dungeons and Dragons – and it celebrates the ‘’coming out’’ of awkward teens who wore cardigans over ankle-length slacks and excelled at maths but now have the confidence to embrace their love of the underworld game they probably kept quiet about at school.

Not that you need to be a D&D fan to understand or enjoy the show – it opens with two of the Melbourne-based trio – Scod (Scott Edgar) and Yon (Simon Hall) initiating D&D virgin Gatesy (Steven Gates) to the game, giving them license to explain the some jargon and rules.

Tripod Versus the Dragon then fills with all the witty ditties and self-deprecating comedy fans have come to expect, but the for the first time introduces in a foreign body to the formula – a girl, armed with a full set of girl germs.

Elana Stone plays the role of Dungeon Master and later, the dragon, guarding the secret place on the magic map that the trio set out to explore. She brings not only a fresh element to the Tripod chemistry, but a huge musical and comedic talent of her own, as well as a stunning set of lungs; her first solo won the biggest applause of the first preview night.

The script is clever, mocking their own love of the cult subject while parodying a classical tragedy, complete with a dangerous quest, love interest, betrayal, tragic death, morality and redemption – plus a chorus, even if it is one that answers back.

Special effects include a guitar, chair, overhead projector, a sheet and a stick with a pointy bit, but the simple, honest way they are used brings another level of comedy again.

The plot seems to lose a bit of momentum about three-quarters of the way through, when a couple of the songs could have been cropped or sped up a bit, but otherwise it’s an enlightening hour, whether you’re a D&D virgin or fan.

Tripod Versus the Dragon is upstairs at the Forum Melbourne, corner Flinders and Russell streets, Tuesdays to Sundays at 9.15pm, until April 18.

British-born, schooled in Holland and Wales, I worked my journalism cadetship in the Home Counties, escaped to London, then spent a couple of years travelling before settling in Melbourne, where I have written and edited for a range of publications, including Pacific Magazines [Your Garden, Home Beautiful, New Idea] and Fairfax Community Newspapers. Now a mother of two wonderful teenagers, I write about gardening, sustainability and people, when I can drag myself away from the vegie patch and my saxophone.
Jane Canaway tagged this post with: Elana Stone, Tripod Read 55 articles by Jane Canaway