Turns out it was pretty twisted

Filed under art and reviews {no comments}

It was only after the play had finished that I noticed the sub title to Turns: A pantomime with a twist.

Would this have helped me understand it better? 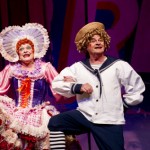 Probably not, although I might not have been so bewildered at the opening scene as Nancye Hayes’ character, Marjory Joy, appears in cartoon-like Little Miss Muffett-type costume and leaps from one vaudeville flashback to another, occasionally joined by Reg Livermore in Little Tommy Tucker-type dress.

As Marjory claims the stage for herself, the flashbacks become a monologue of addled memories and twisted idioms.

OK, so maybe the show is about an ageing star reliving her glory days?

Reg Livermore acts as accessory at this stage, playing the parts of her dead husband, Douglas, and living son, Alistair, as their memories and realities merge in her confuddled mind.

Then comes the time for Alistair to reclaim his place in the spotlight as Marjory’s star fades away – and he shines an altogether different light on what we have seen, plus his own projection of the future.

Once one illusion is dashed, more and more tumble like dominoes, getting more bizarre and being delivered with increasingly tight scripting.

Then, just as a rather neat ending had, I thought, been revealed, back comes the song and dance routine again. Ah well.

Reg Livermore devised and wrote the whole creation with himself and Nancye Hayes in mind and there is no doubt that they are the perfect pair to carry it off.

Their timing and delivery are a joy to watch and some of the lines and concepts are breathtakingly brilliant. Reg especially can drag the audience along in revelling in raucous revelations – only to shut them down in a flash of realism and remorse.

In his introductory note, Reg Livermore writes: “It isn’t exactly the show we discussed but it does I think give us a chance to show what we’re made of, show what we like to do on stage and what we thing we do best, a series of theatrical turns tailored especially for this occasion”.

That is does, but some of the enjoyment was lost for me in the confusion of it all; maybe this is a clever device to mimic the confusion of old age and the lies, imaginings, half-truths and shadows that make up many people’s lives – or maybe the plot just got lost.

Fans of Hayes and Livermore will enjoy this, no matter what – as will anyone who enjoyed the inter-reliant relationships in the TV show Mother and Son – and there are few plays around that include such good live piano solos as offered by Vincent Colagiuri.

The trick to ‘getting’ it is, perhaps, not to try, but instead to follow producer Christine Dunstan’s advice: “Please hand yourself over to the Turns experience and enjoy the ride”.

Turns is at the Playhouse Theatre at The Arts Centre until Saturday, July 9.

British-born, schooled in Holland and Wales, I worked my journalism cadetship in the Home Counties, escaped to London, then spent a couple of years travelling before settling in Melbourne, where I have written and edited for a range of publications, including Pacific Magazines [Your Garden, Home Beautiful, New Idea] and Fairfax Community Newspapers. Now a mother of two wonderful teenagers, I write about gardening, sustainability and people, when I can drag myself away from the vegie patch and my saxophone.
Jane Canaway tagged this post with: Nancye Hayes, Reg Livermore, Turns Read 55 articles by Jane Canaway