Filed under art and reviews, people {no comments} 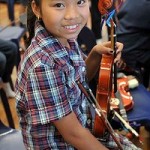 Eh Moo See with her violin. Picture: The Age

FIVE years after arriving in Australia as a refugee, 11-year-old Eh Moo See is still shy about her English vocabulary. Asked if she feels any different when she’s playing her violin, she smiles brightly but whispers for guidance in teacher Susan Porter’s ear.

As we’re talking, Heath wriggles and flops in his chair like any nine-year-old. But as he picks up his viola, his back straightens, his eyes focus and he is engaged.

“He’s one of the most attentive when they’re playing,” says Ms Porter, who helps run a groundbreaking music program being trialled at Laverton P-12 College, in Melbourne’s west.

Asked how he feels when he’s playing, Heath says simply: “Like a professional.”

They might not get paid, but the ensemble now has a growing repertoire and has performed several concerts in the past 10 months, including one alongside the Melbourne Symphony Orchestra — no mean feat for children who had barely touched a musical instrument a year ago.

The intensive program, based on a successful Venezuelan model, introduces orchestral training and performance to children who are otherwise unlikely to experience it. While the Venezuelan experience has now reached 4 million children over the past 37 years, Heath and Eh Moo See are among the first 30 children in the Australian pilot.

Not only have the children — selected randomly from more than 70 who applied to take part — embraced the disciplined training, but a survey sent out after six months showed 90 per cent of parents noticed an increase in their children’s confidence, with 95 per cent saying their children were happier and 95 per cent now more positive about their child’s future.

The two-hour classes, led by some of Melbourne’s brightest young music teachers, are held after school three nights a week. There is no cost to parents and children enjoy “a nutritious snack” beforehand. After basic music instruction using recorders and singing, each child received a junior-sized string instrument: violins, violas, cellos or double bass.

But as Laverton P-12 College assistant principal Paul Lishman points out, “it’s not just about learning a violin, viola or cello; it’s a whole musical program, with percussion and vocal work and learning to perform as a group”.

Only a handful of children have dropped out — all but one due to their families moving, which is common in Laverton’s transient population.

“Not only have the children lapped it up, never complaining about the extra work, but the parents are highly supportive, too. They can see the benefits,” Mr Lishman says. “It’s had huge benefits for their whole learning, too; we’re seeing positive effects on their other work.”

As the Laverton program — called Crashendo! — approaches its first birthday, the organising body, Sistema Australia, plans to expand to Adelaide, and has had strong interest from other Melbourne schools.

The stumbling block is money.

“Depending on staffing numbers, it costs between $2000 and $3000 per student each year,” says the head of Sistema Australia, Chris Nicholls. “The current funding and pilot finishes at the end of the current term. We are seeking funding for the full program, which will take 60 children, five days per week for the school year. We need approximately $60,000 for the rest of 2012.”

The Laverton Crashendo! program pilot was funded from private donations and in-kind support from the college, Hobsons Bay Council and Victoria Police.

By contrast, the Adelaide program has secured major funding from philanthropic, corporate and government sponsors as well as donations of instruments and smaller grants. A third of the Adelaide students will pay $15 a day, subsidising free music education for those unable to pay.

Social justice is a key element in the original El Sistema program from Venezuela. It was established by economist and pianist Jose Antonio Abreu, who wanted to share his love of classical music with children, especially those from the slums.

From one children’s orchestra in 1975, the Venezuelan program now has more than 300 choirs and orchestras, and teaches 300,000 children. Its success has led to the government now funding 60 per cent of its $80 million budget.

Similar programs are now run in Britain, Canada, New Zealand, Spain, Austria and the US.

With no formal background in either music or running a trust, Mr Nicholls landed his role as head of Sistema Australia almost by accident, after seeing his own son transformed through music.

“My son had learning difficulties that led to him being miles behind.” A diagnosis was found, but by then his confidence was at rock bottom.

Then at high school, all students had to learn a musical instrument.

“When we explained his learning problems, he was given one-on-one help; he really grasped it with a passion and started accelerating and was leading the cellos in his orchestra within a few months.”

At 17 he was accepted into the Sydney Conservatorium of Music. “I was flabbergasted that a child could make such progress.”

Mr Nicholls discovered the El Sistema program — and wanted to give Australian children a similar chance to shine.

Inspired, he took up the viola himself and plays in the Maruki Community Orchestra, which he co-founded with violinist John Gould.

However, his steepest learning curve has been getting the Australian version of El Sistema up and running. “I ran the idea past a lot of people; some thought ‘what a nut’, but others thought it was a good idea and were supportive, especially [choirmaster] Jonathon Welch.” 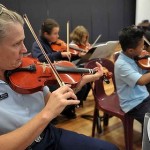 Independently, Senior Constable Sharon Radau, community liaison officer with Hobsons Bay police, was looking for a creative way of tackling youth disadvantage in Laverton — her area’s most disadvantaged place — and discovered the El Sistema program. She was given Chris Nicholls’ number.

“Victoria Police wanted to help run the program at Laverton P-12,” says Mr Nicholls. “I tried to get funding but it was really hard. So I just sank everything I had into it; I don’t have a house or any money any more, but I have this program up and running and it’s working — if we could run it every day of the week the kids would probably turn up.”

To make it more attractive for philanthropists, Mr Nicholls is converting Sistema Australia from an incorporated body to a limited company. And to gauge the program’s value, Melbourne University was asked to research its benefits.

A postdoctoral research fellow in music psychology, Dr Margaret Osborne will assess it as part of a three-year study examining the value of music education.

Senior Constable Radau can already see the powerful effect of music; she is learning violin alongside the children.

“Nobody is forcing the kids; it’s all voluntary. To get kids occupied and off the streets is just gold.”

British-born, schooled in Holland and Wales, I worked my journalism cadetship in the Home Counties, escaped to London, then spent a couple of years travelling before settling in Melbourne, where I have written and edited for a range of publications, including Pacific Magazines [Your Garden, Home Beautiful, New Idea] and Fairfax Community Newspapers. Now a mother of two wonderful teenagers, I write about gardening, sustainability and people, when I can drag myself away from the vegie patch and my saxophone.
Jane Canaway tagged this post with: Crashendo! Sistema, Hobsons Bay, laverton, Victoria Police Read 55 articles by Jane Canaway