Instant hot water, solar chargers for your phone, wall-mounted TVs (with pop-up aerial), air conditioning and hi-fi systems with external speakers are some of the luxuries you will find in a modern caravan.

No need to pack a separate barbecue, awning or picnic table; chances are these are fitted into the side of the van, to be pulled out when needed. You may even get a pull-out deck.

Forget the arguments over re-hitching the car to the van – innovations now allow you to move your trailer by remote control, or at least see where you’re going with a rear-view camera. LED alert caps from TyreCheckers will signal when your tyre pressure drops 4psi.

Queensland-based DreamPot offers a powerless pot that slow-cooks your dinner while you drive. And whether you consider it domestic bliss or drudgery, built-in washing machines are another option, as are purpose-made vacuum cleaners, although a robotic maid to operate them might be harder to find.

“There is more consumer demand for luxuries,” observes Robert Lucas, CEO of the Caravan Trade & Industries Association of Victoria. “It’s not just the good old days of roughing it. There are new layouts, safety systems, and luxury extras, such as en suites even in smaller caravans; through research and develop manufacturers can now put them in smaller vans without owners needing a 4WD to tow them; smaller cars need to be catered for.

“That’s what people are demanding and the industry moves very quickly to meet customer demand,” he said. 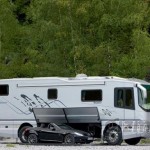 But the one new innovation that will create a lasting legacy for the industry, according to Mr Lucas, is the anti-sway technology introduced in 2012 by AL-KO International.

“It will usher in a new era of safety in the caravan industry,” he says simply.

The Electronic Stability Control (ESC) technology controls excessive sideways oscillation that can result from high winds or from swerving around an obstacle on the road. This swaying is scary at least and, at worst, can lead to jack-knifing of the car and van.

“Rather than slamming on the brakes, which is most drivers’ natural reaction and often the worst thing they can do, the ESC has sensors in the unit that apply the brakes in a smooth and controlled manner to pull the caravan back into line,” explained Rob Funder, technical and manufacturing manager at AL-KO.

“More than 30 Australian caravan manufacturers (which account for most of the market) are now installing the ESC as standard on premium models and we believe we will soon see it rolled out across the rest of the market,” said Brad Hooper, AL-KO marketing services manager.

Fitting ESC adds about $1000 to the cost of a new caravan and about $1500 to retrofit. Vans need to be fitted with approved brakes and suspension but most Australian manufacturers comply.

To view a video of ESC in action or to make a booking to have AL-KO ESC fitted to your caravan, visit www.alkoesc.com.au

“I’m really pleased it’s being introduced,” said Mr Lucas. “If you’re a bit reluctant to try a caravan because you’ve never towed before, this will give you much more confidence.” 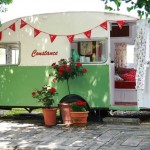 With Australia’s wide, open roads, beautiful scenery and excellent roadside facilities, it’s not surprising the caravan and recreational vehicle (RV) industries thrive here. It also taps into Australia’s talent for ingenuity and innovation, with most pre-war caravans being hand-made.

Victoria is particularly blessed with manufacturers and users.

“There are 482,000 registered RVs in Australia, and 132,000 of those are … in Victoria,” Mr Lucas said. “That’s a large slice, so they’re as popular as ever. There was a view that caravanning was going out of popularity but that’s not what we’re seeing.”

This observation was echoed in a recent survey by Australia’s leading manufacturer, Jayco, which found that eight out of 10 Australians believed a caravan holiday was a good option for families.

Even though many who answered the survey had not experienced RV holidays as a child, most saw it as an affordable way for their family to spend quality time together and to see the Australian countryside.

Fifth wheelers have an extension on the front that extends over the tow vehicle and sits on a round plate – hence the name fifth wheel – and need to be towed by a truck or utility instead of a car. Slide-ons also fit on utes, literally sliding onto the back tray, while tent-trailers pack down to a small trailer size but open up to form a luxury-sized tent with raised double bed (over the trailer) and lots of floor space. Most have pull-out kitchens and storage in the trailer, too.

For those who find they don’t use their van as much as they would like, a remedy is offered by the RACV Caravan Club, which has been encouraging RACV members to enjoy their vans since 1937.

About 100 people stayed in 32 caravans on the group’s first outing in 1937 and the strange spectacle attracted more than 1000 spectators to the Sunday public open day. More amazing, perhaps, was that the site at Barwon Heads was provided free of charge.

The club organises monthly rally weekends and keeps groups to a manageable size by splitting the membership into five divisions. All five combine for annual events, including summers at Sorrento, where the club leases a foreshore reserve, with exclusive use for three months.

“We leave our van there for the three months and it only costs $900, or a fortnight costs $120, so it’s pretty good value,” club secretary John Wall says.

It has proved so popular that members must ‘earn’ the best sites by attending rallies through the year.

“It provides a discipline to use your caravan and a context in which to use it,” Mr Wall says.

Some families have continued the membership down to second and third generations.

“Some have been continuous members for 50-60 years ,” Mr Wall says. “Another couple bought a new van at 98 and they were still caravanning at 102.

“We don’t lose many members so people must be pretty happy.” 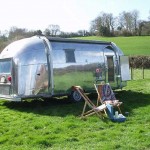 The legendary couple who shared their love of caravanning until the age of 102 – the late Arthur & Pat Pullen – were also keen ‘Vintage Vanners’; a network of folk dedicated to the restoration and preservation of caravans built before 1970.

“My interest is in trying to enthuse others,” says Alan Stevens, who discovered vintage vans through restoring vintage cars.

“A lot of people love the interiors as much as the van, because we fit them out to suit the era: tea towels, games, cups, everything. You rarely see that stuff, let alone get a chance to use it.”

Bendigo-based Mr Stevens rents out two of his vans for holidays – as well as photoshoots and window displays – and will deliver them to sites for non-towers. He has a four-berth 1938 Paramount, a 1947 Don, fitted with wireless radio and leadlight windows, and is working on a 1920s van.

“I tow them with a 1949 Austin Sheerline, which has a 4-litre engine and plenty of torque,” he says.

While designed to be a home-away-from home, the vans were also something of a luxury item, so their style and construction not only reflects the latest housing of the day but the building materials and trends of each era.

Despite their age, many of the older vans are fitted with electric brakes (often plugging into a cigarette lighter), while others had over-ride brakes that were activated by the pressure between the van and the car when the car brakes.

Ease your way in

So you have your new van and want to try it out. Where to start?

RACV members can save at least 20 per cent on accommodation at the club’s resort in Cobram, and many local traders also offer discounts. Plus the staff makes a special effort to settle in beginners.

“A lot of parks are now offering help reversing or setting up vans for new or inexperienced people,” the manager of RACV’s Cobram resort, Gary Hunt, says.

While Mr Hunt has observed caravans become more luxurious and sophisticated, he warns buyers to consider their towing car when choosing a van.

“Sometimes people do not realise their car doesn’t have the right towing capacity. They might even be breaking towing legislation without realising, or get into problems when braking suddenly. Update your vehicle first if you want a bigger van.”

Mr Hunt is familiar with the many different styles and preferences: long-haul travelers happy with basic facilities and more concerned with cost; those with active children who need entertaining, and those who just want peace and quiet.

With volleyball courts, jumping pillows, indoor pool and spa, outdoor pool, recreation room, tennis courts and a BMX track for kids, he knows the resort offers more than some travelers need, but Cobram also has plenty of what every camper wants: space.

“We could easily fit 80 sites or more on the 30 acres we have here, but we stick to about 40, because regular vanners want a clean, presentable park, with amenities that are clean and light, and they want space.”

The Caravan, Camping & Touring Supershow is at Caulfield Racecourse from March 7 to 12, 2013. Details: www.caravanshow.com.au

British-born, schooled in Holland and Wales, I worked my journalism cadetship in the Home Counties, escaped to London, then spent a couple of years travelling before settling in Melbourne, where I have written and edited for a range of publications, including Pacific Magazines [Your Garden, Home Beautiful, New Idea] and Fairfax Community Newspapers. Now a mother of two wonderful teenagers, I write about gardening, sustainability and people, when I can drag myself away from the vegie patch and my saxophone.
Jane Canaway tagged this post with: Al-Ko, caravan, luxury, RACV, vintage Read 55 articles by Jane Canaway