Boy Out Of The Country – By Felix Nobis 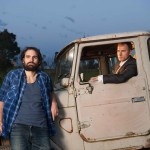 It’s a while since I’ve heard an audience gasp in shock at a character’s actions onstage but the depths of sibling bastardry portrayed in Felix Nobis’s Boy Out of The Country certainly hit the spot.

Tightly written for the most part, with only a couple of flat spots, Nobis explores the multifaceted issues of family, belonging, acceptance and growth in this true-blue Aussie tale of two brothers.

Nobis opens by laying his cards on the table and presents a simple scenario that would be familiar to all Australians: Bad-boy Hunter returns to his small-town home after an unexplained seven-year absence to find his elderly mum moved into a nursing home, his rundown childhood home about to be bulldozed to make way for a new housing development, and his former flame married to his clean-living brother, Gordon.

Soon afterwards, Hunter finds himself in the town lockup being lectured by the local sergeant for brawling with Gordon.

Nobis gently develops the story like a watercolour painting, adding depth and colour in subtle layers that slowly reveal a more intricate picture in a wholly gratifying way.

It is sharp, canny and astute, but it is also very funny.

The script captures the vernacular and flows with casual abuse, but its language shines most brightly in the monologues performed by the local cop, played by Christopher Bunworth, and mum – Jane Clifton.

In the hands of these seasoned experts, not only do their characters take on a more poignant air, but the cadence and verse of Nobis’s words is also revealed.

More than once, a quotable quote hit me mid-monologue with its condensed insight and observation.

It’s a script that demands tight comic delivery balanced with laid-back country style and occasionally this was marred by a little stiffness, but quite possibly due to first-night nerves.

Credit is due to designer Rob Sowinski, whose minimal set captures the essence of country town without being overly cute or contrived.

Interestingly, despite its relatively short run, the play is listed on the Shows for Schools website; one hopes teachers take heed of the understated ‘some coarse language’ warning before booking.

Boy Out Of The Country 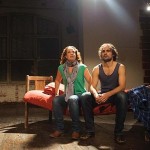 British-born, schooled in Holland and Wales, I worked my journalism cadetship in the Home Counties, escaped to London, then spent a couple of years travelling before settling in Melbourne, where I have written and edited for a range of publications, including Pacific Magazines [Your Garden, Home Beautiful, New Idea] and Fairfax Community Newspapers. Now a mother of two wonderful teenagers, I write about gardening, sustainability and people, when I can drag myself away from the vegie patch and my saxophone.
Jane Canaway tagged this post with: bang mango cools, Boy out of the country, Felix Nobis, fortyfivedownstairs, Jane Clifton, martin blum Read 55 articles by Jane Canaway