Filed under conservation, gardening, Published work, sustainability by Jane Canaway on February 27, 2012 at 12:33 am {no comments}

First published in Your Garden, Autumn 2012 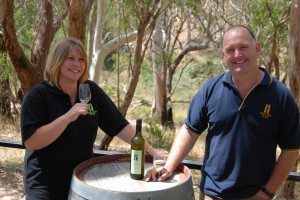 It was a year or two after bringing in professionals to manage their vineyard that Sean and Sue Delaney noticed all the insect and aquatic life around their dam had disappeared.

“We realized all the herbicides, pesticides and fungicides the contractors were using was running off to the holding dam and killing everything off,” Sean explains.

“We thought ‘this is ridiculous’ – we’re living at the bottom of hill with this run-off heading to our house with young children and we could see the damage water-soluble sprays were doing; biodynamics was a way to find alternative method to break our reliance on chemicals.”

At this stage you may be thinking: ‘biodynamics – yes, heard of that – Rudolf Steiner’s take on organic farming, isn’t it?’ and, yes, that’s part of the story.

But biodynamics also requires planting, cultivating and harvesting according to the lunar calendar, as well as more spiritual aspects that critics have compared to alchemy and magic – such as creating compost improver from ‘Oak bark fermented in the skull of a domestic animal’, fermenting dandelions in a cow’s stomach for another preparation, stirring spray solutions in alternative directions for an hour to energise the mix, and burying a cow’s horn to improve the soil’s condition.

Such unorthodox methods might raise eyebrows in a Nimbin commune, so what was the appeal for city professionals with accounting and engineering backgrounds?

“As an engineer I was very skeptical,” agrees Sean. “But I thought ‘if it works I’ll try it and if it doesn’t I won’t’. And, you know, a lot of it works.”

Sean quotes pruning as an example.

“When you’re pruning, you’re cutting 70-80% of the plant away, creating large wounds and increasing the chance of disease; in biodynamic culture you wait until the sap is moving up into the plant so when you cut the plant the wound will be wet – if you cut at a different part of the cycle when the sap is going down, you could pull disease into plant.

“So I tried it and cut the plant when the lunar calendar says it’s good to prune and [the wound] was dripping like a tap. I tried again four or five days later and it was dry. I did it a few times with different plants and it was always the same.

“As engineer I needed to know how things work but as I’ve got older I’ve had to accept that I don’t have to understand it if it works. I don’t believe in all that life force stuff but I think there’s a lot of stuff we don’t know about soil and growth so it will probably be explained one day.”

Because biodynamic methods aim to improve the soil health, and soil plays such a key role in determining a wine’s taste, biodynamic principals are being adopted by a growing number of wine makers who believe it improves their end product.

“I can’t put my heart on my hand and say it’s a better, healthier product but the methodology of making them is healthier,” Sean says. “Others who have gone down this path do it because they say it expresses the terroir and sense of place better in their wine; I can’t guarantee that – it may well but we do it because we live at the bottom of hill below a vineyard.”

Filling a gap in the forest

The Delaneys’ winery is the Adelaide Hills’ only cellar door in the area to be “climate action innovator and advanced eco-certified” and their business model has won a slew of tourism and environmental awards.

Sean and Sue are also happy with the Sauvignon Blanc and Chardonnay their vines are producing and their sparkling wine has been ranked an impressive 93 in the prestigious James Halliday rankings. However farming was not even on the radar when they bought their 10.5-hectare patch of bush in 1997.

“We had no horticultural or agriculture background at all, but we had been looking for a project we could work on together and we fell in love with the property,” Sean says.

The land is home to a miraculously well-preserved stand of Candlebark woodland – an endangered ecosystem that has the highest conservation rating in the Mt Lofty Ranges.

“But the trees had been cleared from the top 5 acres – it was too big to revegetate and in ’96-’97 there were good tax incentives for primary production. Soil samples suggested it would be a good site for cool-climate grapes or olives – well, olives were a weed species that we were pulling out on the other side of hill, so we looked at grapes.

“If the land hadn’t been cleared we wouldn’t have had a vineyard, so it is just through serendipity that the property has been able to provide us with an income.”

Aware of their land’s value in terms of habitat and biodiversity, the Delaneys have put huge amounts of time, money and passion into restoring its natural balance.

“Only 2% of remnant vegetation remains intact in South Australia,” Sean explains. “A lot of Candlebark woodland has been grazed, so you get the beautiful white trees and no understorey; our property has about 150 plant species and supports 66 birds,” he says.

However the Delaneys’ block was still under threat from weeds.

“Our biggest asset is the native seed still in the soil – it can stay viable for many decades – but our biggest liability is the weed seed that is also in the soil,” Sean says.

Their solution was to use “strip burning” techniques; burning off to sterilize the soil and create light and space to encourage seeds to germinate.

“The main weed species like broom and gorse emerge first but we can use a selective herbicide to knock that out and then the second flush is native seed.”

Some 600,000 plants have also been planted on the property and, through local Landcare group, Sue has recently won a grant to establish a biolink between Morialta to Coralinga parks, covering 260 hectares on 19 adjoining properties – an essential feature in a landscape where fragmentation is one of the greatest risks to remnant vegetation.

To complete the sustainable picture, the business has a policy of zero waste policy (“you buy differently and do a hell of a lot of washing up,” says Sean), all water is harvested and reused on the property and, to attract beneficial insects and increase biodiversity, native grasses are being replanted between the vines.

As if repaying them, nature is rewarding their efforts.

Guided wildflower walks, live music events and the kids’ discovery trail through the bush are nearly as popular as wine tastings and South Australia’s Natural Resources Management Board uses the property as a showcase.

Interestingly, since adopting biodynamic principles, the vines’ yield has actually dropped by a third, but the quality has improved, and they save money on sprays. Plus the frogs have returned to the dam.

To help protect the local population of Yellow-tailed Black Cockatoos, community baiting has removed at least 2,300 foxes over 13 years.

“We also have a family of Yellow Footed Antechinus living under the floor,” Sean adds.

The couple is constantly amazed by the power of the Australian bush to heal itself.

“Near here there’s a place that burnt down in 1980 and sat vacant for many years,” Sean tells. “A few years ago developers finally removed the concrete and a huge amount of native orchids and lilies came up; they had been buried for 37 years and yet the seed was still viable,” he marvels.

“Living here, you can’t help but be affected by the beauty of the place.

“We have mob of Tamar Wallabies that always give birth on same night – summer solstice – and two major insect hatchings on full moon twice a year; when you are living in the city, focused on TV, you don’t notice things like that.”