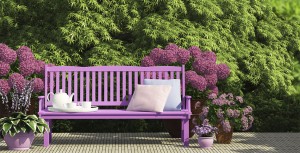 Hugging trees may be out of fashion, but what if a tree was to hug you? It’s a concept garden designer Betsy-Sue Clarke employs when creating a therapeutic space. “We all need a hug,” she says. Betsy-Sue specialises in healing gardens and says an enclosed place to sit – preferably by water or with a view – is a key feature. “Having a tree canopy overhead is like having a hug.”

Surgical patients with views of nature have been found to have shorter post-operative stays, take less pain medication and experience fewer minor post-operative complications than those facing man-made structures such as buildings.

Steven originally thought patients at the Acquired Brain Injury Unit would benefit from gardening activities, but now patients from all the departments – as well as visitors – use the space. One patient even got married there.

Horticultural heroes is a new series of features being run by Your Garden magazine.

The following article ran as its inaugural feature in Summer 2011 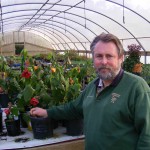 Clive with some some new abutilons due for release

RUNNING a restaurant is not the traditional training for entering the plant industry.

But then, despite being a second-generation nurseryman, Clive Larkman is not a traditional gardener.

For starters, he’s never had a garden of his own: “I’d love to have a vegie garden but I just never had the time to do it.”

Asked if it might take it up in his retirement, he quite frankly admits: “I probably wouldn’t have a garden at all – I wouldn’t have time. If I had the money, I’d pay someone to garden for me; an old English-style arboretum, or a botanic garden style with labelled and named plants and collections.”

Yet he has a burning passion for discovering new plants – a passion that sees him travel overseas most years to hunt down new species. He imports about 200 plants a year – although sometimes only half of them are ever released.

And every so often, he’ll come across a plant or genus that totally fascinates him, and he won’t rest until he’s learnt all about it.

This hunger for knowledge has brought a wealth of plants to Australian gardeners; after being checked through quarantine, plants that Clive and his wife Di bring back are tested for hardiness, propagated, then finally made available through the plant wholesalers that Larkman Nurseries supplies.

It’s a long, slow process. Before leaving England or South Africa or wherever he’s been plant hunting, all plants must be bare-rooted, cut right back and jammed (carefully) into bags then boxed for the flight home; consequently he routinely loses 40% of stock in transit – he once lost his whole cargo after the plants were sprayed before landing – and a grass he imported in 2002 has only just been released from quarantine.

He was in the UK in September 2001 when the 9/11 terrorist attacks took place.

“As I was preparing the plants for transport, I was watching all the events unfold on TV. Then I had to catch the first flight out of London when they re-opened Heathrow Airport – it was the most nerve-wracking flight I’ve ever been on.”

But it hasn’t stopped his overseas plant-hunting trips. 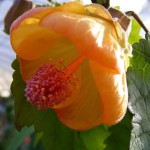 “We’ve got two new abutilons and some rather unusual Veronicastrums due for release next year. And on our last trip we collected 3 or 4 yellow, moisture- and shade-loving salvias,” he marvels of the unusual gems he discovered in a specialist nursery in north Wales.

While he names a few of his overseas sources, the Welsh nursery is a mystery he won’t share.

“Every time I go there I’ll spend 3-to-400 pounds and the car will be so full I can barely get into it.”

His wife Di rolls her eyes: “I have to drag him away; we get two of every plant in case one dies and there’s only so many we can bring back.”

The road to here

Clive is also fascinated by the stories behind plants; what the name means, why it was chosen, who discovered the plant and how it was brought into cultivation.

However plant lovers can’t rely on his being in the industry forever; he has not given up his dream of one day getting into politics, which is, bizarrely, how he came to be running a restaurant.

“My problem in life was choosing what to do – there were so many things that I wanted to do or could have done,” he says.

“I basically wanted to get into politics but I had a belief that if you hadn’t been successful at something else, you shouldn’t enter politics.”

So, after studying botany and zoology, he headed overseas to travel and get some life experience. He worked as a handyman in the US for 18 months, ran a restaurant in the UK for a year then explored more of the country via a truck-driving job.

“Then my dad (nursery founder Barry Larkman) had a heart attack so I came home, and five weeks later he was dead.

“So you have two choices; you either throw you and your mother out on the street or you sign on to take over the loans and the business and make the best of it that you can.”

Since 1989 he has built the nursery up from six staff producing 300,000 plants a year to a peak of 40 staff producing 2.5 million plants about three years ago, as well as adding a mail-order business and buying the Victorian agency of Renaissance Herbs in 2007.

“My aim was to build (the nursery) up to a certain stage before getting into politics. I got the business going well but then we had the drought and GFC and so now I’m building it back up again.

“But there are times when I’m sick of it – sick of running a small business and dealing with staff and the government and bureaucracy.”

Clive has already dabbled in local politics, serving a term as councillor on the Yarra Ranges Shire council and involved in numerous committees, boards and groups, including being president of the local chamber of commerce, Victorian state president for the Australian Institute of Horticulture and treasurer of the Australian Region of the International Plant Propagators Society.

You might think that would have involved enough bureaucracy to last a lifetime, but Clive sees it differently: “If you want to make the world a better place you do it from the inside, not the outside.

“And when you’re on council or whatever you don’t have to deal with the everyday business of dealing with staff and getting people to pay you.”

Clive is also a life member of the Australian Lavender Growers Association, having dedicated much time and effort to discovering as many varieties of Lavender as possible, and writing a start-up guide for prospective lavender farmers.

“I’m a botanist so plant nomenclature is key for me; I started trying to sort out lavenders because their names were a mess – by the time I finished I knew more about lavender than most lavender growers in the country, so we just started expanding our lavender range; then we did the same with rosemary and we’ve got a huge collection of mints I’m trying to understand at the moment,” he explains.

Past imports that are now perennial favourites include Lavender ‘Avon View’, Sisyrinchium ‘Devon Skies’ and numerous penstemons and salvias. Of the 2,500 plants Larkman Nursery grows, about 40% are Australian natives and 250 are herbs.

The latest plant to grab Clive’s attention is Chia – a blue- or white-flowered salvia (S. hispanica) from central America now widely acclaimed for its health properties.

“I started researching that and we’re now releasing chia plants in our herb range in mid-October. If you believe all the hype, it provides more calcium than milk, more potassium than bananas, more omega oil than fish – you can live off a tablespoon of chia seeds and a glass of water a day – and Australia is now the world’s largest grower of chia.”

Research is a key part of Clive’s work and his office – part of a collection of sheds and plastic tunnels strewn across a steep hillside with views across Yarra Valley – has a bookshelf crammed with hundreds of titles, but he is finding he needs them less and less.

“The biggest change has been the introduction of the internet,” Clive observes. “Before uploading a plant into my database I have to learn about it – it used to take hours but now I can do it in a matter of minutes.”

Like his father, who launched, rebranded or wrote for a number of horticultural publications before starting the nursery, Clive writes for several trade journals, and is a regular guest on Melbourne’s 3AW gardening program as well as weekly presenter on Channel 9’s Garden Gurus show. Other hobbies are eclectic, from collecting antique books to riding his anniversary edition Harley Davidson.

With his mother still involved in the business, his partner Di in charge of its day-to-day management and one of their three sons, Simon, working in sales, it is a truly family affair – but Clive still believes a good business owner should aim to make themselves redundant. Working seven days on the business at the moment, he may still have a way to go on that plan.