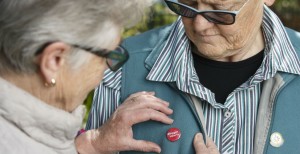 Losing a loved one is hard enough. But when that loss is a slow, distressing erosion of memory, interests, ability and eventually their recognition of you, the pain and loneliness can be overwhelming.

This is the situation faced by many of those dealing with dementia.

“There is ongoing grief as each progression occurs but you deal with it, make an adjustment, and move on,” says Anne Tudor, 66, the primary carer for her partner, Edie Mayer. Edie was diagnosed with younger-onset Alzheimer’s six years ago, aged 59.

“It’s the hardest thing I’ll ever have to do, but I have an unwavering commitment so I just have to get up and keep going,” Anne says. “Edie’s attitude makes it easier – she’s just so positive and stable; so together. She has no short-term memory at all but she’s so kind and thoughtful and if she sees somebody in need she’s immediately there to help.”

It was Alzheimer’s that brought the couple to Ballarat in Victoria; Anne’s mother had it, so she and Edie moved there from Melbourne, where they had met 32 years ago, to support her mother.

They stayed in Ballarat and two decades later, despite their own battles, they are the directors of a project aimed at driving greater awareness of dementia in the community.

In September last year, the pair launched #BiggerHearts, a campaign to encourage the people of Ballarat to create a dementia-friendly community.

The project has attracted wide support. Australian Unity is a major sponsor alongside Alzheimer’s Australia. Through informal meetings at a local café, the group invited people living with dementia to get out and meet others, but also asked the public for ideas and feedback.

“There’s a lot of stigma around dementia, so there are a lot of people with dementia who don’t access services or admit it,” the project’s coordinator, Dr Catherine Barrett, says.

“Many people are coming out for the first time and saying, ‘I have dementia and don’t know what to do’.”

An Alzheimer’s Australia report, released in September last year, found people with dementia and their carers were twice as likely as the general public to experience loneliness and three times more likely to not have a friend to confide in or to call on for help.

Central to the #BiggerHearts campaign is a film that aims to encourage social connections.

“Australian Unity funded us to produce a film to bring in community members and have conversations with people with dementia,” Catherine says. “The message is, it’s not only possible and important, it’s actually lovely to converse with someone with dementia.

“The film can be downloaded from the #BiggerHearts website, so we hope families will watch it,” Catherine says. “Or it could be good for groups to sit and watch, so they understand a bit more about talking to people with dementia.”

Richard Prideaux, Australian Unity’s General Manager for Home & Disability Services in Victoria and South Australia, says sitting down with clients and working out what their specific needs and goals are is critical.

“Australian Unity’s Better Together service promise means we go out of our way to make what our clients want possible. We start by developing goals that are meaningful and important to the client and their family or carer.

“We then work together with each client to establish services, referrals or connections required to meet their goals and set a timeline with a start and end point, including regular reviews along the way.

“The relationship built between the client and the staff involved in supporting them to reach their goals is very important and has a positive impact on their health and wellbeing,” Richard says.

Supporting Anne and Edie to make the film realised their goal.

Eventually, the Ballarat program – which echoes pilot projects in Port Macquarie, Kiama, Darwin, Holdfast Bay, Bribie Island and Beechworth – plans to form the Ballarat Dementia Alliance and develop practical solutions such as signage, support services and infrastructure for those with dementia.

Through the group, Anne receives carer’s respite, an activities program for Edie and four hours’ help a week from a local non-profit group. The pair also has a chef come in for five hours a week, organised by Australian Unity, to work with Edie in cooking meals.

“That’s a big help for me,” Anne says. “And Alzheimer’s Australia came on board and offered a three-day living-with-memory-loss program, plus legal advice on getting your house in order and making decisions while you’re in a position to make them.

“We now know what’s going to happen in terms of where we’re going to end up and Edie has made an advance care plan. We’re flourishing in adverse circumstances.”

Learn more about Anne and Edie’s campaign at celebrateageing.com/bigger-hearts

Learn more about dementia at fightdementia.org.au