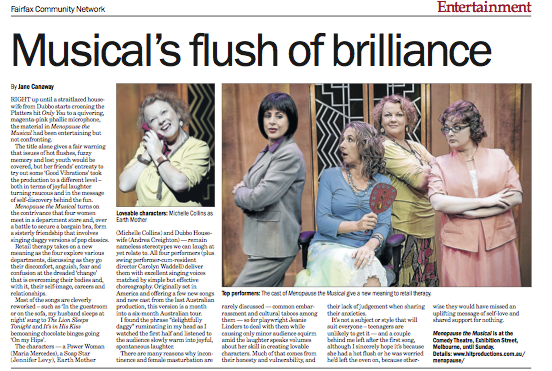 Right up until a straitlaced housewife from Dubbo starts crooning the Platters hit  ‘Only You’ to a quivering, magenta-pink phallic microphone, the material in Menopause the Musical had been entertaining but not confronting.

The title alone gives fair warning that issues of hot flushes, fuzzy memory and lost youth would covered, but her friends’ entreaty to try out some ‘Good Vibrations’ took the production to a different level – both in terms of joyful laughter turning raucous, and in the message of self-discovery behind the fun.

Menopause the Musical turns of the contrivance that four women meet in a department store and, over a battle to secure a bargain bra, form a sisterly friendship that involves singing daggy versions of pop classics.

Retail therapy takes on a new meaning as the four explore various departments, discussing as they go their discomfort, anguish, fear and confusion at the dreaded Change that is overcoming their bodies and with it, their self-image, careers and relationships.

Most of the songs are cleverly reworked – such as “In the guestroom or on the sofa, my husband sleeps at night” sung to The Lion Sleeps Tonightand It’s in His Kiss bemoaning chocolate binges going “On my Hips”.

While the characters – a Power Woman (Maria Mercedes), a Soap Star (Jennifer Levy), Earth Mother (Michelle Collins) and Dubbo Housewife (Andrea Creighton) remain nameless stereotypes we can both laugh at yet relate to – all four performers (plus swing performer-cum-resident director Carolyn Waddell) deliver them with excellent singing voices, which were matched by simple but effective choreography. Originally set in American, and offering a few new songs and new cast to the last Australian production, this version is a month into a six-month Australian tour.

I found the phrase “delightfully daggy” ruminating around my head as I watched the first half and listened to the audience slowly warm into joyful, spontaneous laughter.

Then came that pink microphone.

It’s not a subject or style that will suit everyone – teenagers are unlikely to get it – and a couple behind me left after the first song, although I sincerely hope it’s because she had a hot flush or he was worried he’d left the oven on, because otherwise they would have missed an uplifting message of self-love and shared support for nothing.

Menopause the Musical is at the Comedy Theatre, Exhibition Street, until August 29. Details: www.hitproductions.com.au/menopause/

British-born, schooled in Holland and Wales, I worked my journalism cadetship in the Home Counties, escaped to London, then spent a couple of years travelling before settling in Melbourne, where I have written and edited for a range of publications, including Pacific Magazines [Your Garden, Home Beautiful, New Idea] and Fairfax Community Newspapers. Now a mother of two wonderful teenagers, I write about gardening, sustainability and people, when I can drag myself away from the vegie patch and my saxophone.
Jane Canaway tagged this post with: collins, comedy theatre, creighton, levy, menopause, mercedes, musical, review, waddell Read 55 articles by Jane Canaway