Filed under Uncategorized {no comments} 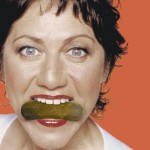 Last night I sat down with comedian Rachel Berger and she spent a couple of hours telling me the whole amazing saga of her family’s escape from Nazi-held Poland – about love stronger than fear, about belonging, pain and survival.

We’d only just met but, along with a few hundred close strangers, she opened up her heart to me and shared the stories of her childhood – the ones of how her parents endured, evaded then escaped one of the most disciplined, highly trained military machines Europe has ever witnessed, and her equally angst-ridden flight from the bullying of two primary school-aged girls in Spotswood.

For her, schnitzels helped save the day, but love and a sense of humour were essential for both and it is these traits that shine through, forcing light into the darkest corners of her own personal history and lifting the weight that builds over the audience.

Reprising her first foray into serious theatre, Berger steps out from behind the microphone stand she has teamed up with for more than 25 years of comedy.

Using minimal props and starkly simple lighting, Berger dazzles her audience from the start, leading with the sheer strength of her parents’ story, then following through with sharp but sensitive mimicry skills, bringing scores of characters to life as she jumps between her parents, hardy Hungarian teachers, brassy Skip neighbours in the western ’burbs, then finally the broken, displaced people that make up her tribe in Acland Street. It is here that feels like home, as the family settles into running a delicatessen, comforting homesick refugees with sausages, potato salad, chopped liver and sandwiches that enjoyed a city-wide reputation.

While the story is intensely personal, the strong strands of Melbourne and universal humanity that are woven through it draw in the audience without seeming to try: “All I wanted was to fit in and be liked – that and to have the full 72-colour set of Derwent pencils,” she says and looks up in surprise as the audience as one moans with shared desire. “You too, huh?”

Berger first shared this harrowing, uplifting tale with Melbourne in 2008, first at La Mama then Chapel off Chapel, earning her Green Room Association nominations for both writing and performance. She was inspired to break from her usual comedy routines by the Tampa-led events of 2001, so the ongoing ‘turn back the boats’ debate makes it an interesting time to revive this heart-warming show.

“It’s not a comedy, it’s a play,” was how someone described the show to me beforehand, but as Berger adopts her mother’s accent and persona to retell the stories she heard as a child, she reveals the source of her dry wit and comic timing; only the remarkable Rosa could get a belly laugh from relating how she averted her beloved Marcus from committing suicide.

Take a supply of tissues and get there on time – there’s a whole-show lockout for latecomers – but go; there are few other ways of spending 75 minutes in a basement that will leave you feeling so content with your life.

British-born, schooled in Holland and Wales, I worked my journalism cadetship in the Home Counties, escaped to London, then spent a couple of years travelling before settling in Melbourne, where I have written and edited for a range of publications, including Pacific Magazines [Your Garden, Home Beautiful, New Idea] and Fairfax Community Newspapers. Now a mother of two wonderful teenagers, I write about gardening, sustainability and people, when I can drag myself away from the vegie patch and my saxophone.
Jane Canaway tagged this post with: Rachel Berger Read 55 articles by Jane Canaway