Filed under gardening, people, Published work by Jane Canaway on January 9, 2012 at 3:38 am {no comments} 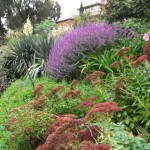 Seasonal change and contrasting texture is provided by Sedum 'Autumn Joy' in the foreground with purple Salvia leucantha and white-flowering spikes of Yucca filamentosa behind.

If sharing adds to a garden’s beauty, then Kate Herd’s chunk of escarpment overlooking the Yarra River is doubly lovely.

Kate’s generosity with her garden is almost as remarkable as the garden itself.  Not only is it open regularly through Australia’s Open Garden Scheme, but locals use the tennis courts for a nominal fee (which hasn’t changed for 15 years) and Kate has built an amphitheatre to host local events and productions.

“We host the Alphington Christmas carols every year and an annual event called Music from the Wetlands festival in autumn,” Kate says.  “We got 1000 people last time – you get a real sense of being down in the wetlands by the river there.”

Enjoying the view over two-and-a-half hectares [six-and-a-bit acres] from her balcony, Kate can see which neighbours are out walking their dogs along the riverside path that fringes her garden.

“I have a belief that people should be able to access to the river in these urban areas – there is an element of trust involved but I’ve never had problems.”

However she does draw the line at young hoons who find she’s left a side gate open and decide to test out their off-road skills on the river flats.

“I just go down and yell at them and remember to shut the gates.

It’s brave talk for any young woman, but Kate could be forgiven for feeling more vulnerable than most – she’s been confined to a wheelchair since a diving accident when she was 16. But feeling vulnerable isn’t in Kate’s repertoire; she’s far too busy finding new outlets for her creativity and love of gardening.

From clubhouse to home

When Kate’s mother first bought the property in 1994, the 1890-built house had spent 14 years as a ‘clubhouse’ for a group of university mates who repaired the dilapidated buildings, built the tennis courts and dug the dam but kept the rest of the garden as lawns or car park.

“The house was all open plan with a huge mahogany bar and toilets out the side, so we spent a year renovating it,” Kate recalls.

“I think the topsoil from the river flats was actually removed – it’s solid clay in parts – so we did extensive earthworks.

“Then [landscaper] Simon Rigg built the stone walls for the terraced garden and I planted it out with two gardening friends, Annie James and Sue Smart.”

Now her mother lives mostly in NSW and Kate is caretaker at View Street, which she shares with two friends, a dog and two cats. 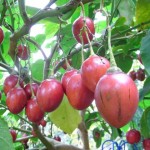 Tamarillos add colour - and are yummy.

A fan of productive gardens, Kate has planted out a kitchen garden close to the house with a Navel orange, Meyer lemon, Tahitian lime, Kaffir lime and tamarillo, plus herbs, salad plants, rhubarb and a muscatel grapevine.

From here a bluestone stairway cuts through the terraced levels, while a wide path of granitic sand – carefully cambered to reduce erosion – snakes along each level to the river valley below.

Kate’s garden is designed to be wheelchair accessible, but where her chair won’t go, she gets out and crawls.

“I’ve ‘bummed’ my way around many gardens in Australia and Europe,” she says.

She uses the same method for planting and weeding.

“Steps are not an issue. Although I don’t like ‘bumming’ around the garden in the summer because I feel I can’t move quickly enough if I come across a snake.”

A garden designer herself, Kate likes to test-drive plants at home before recommending them to others, but the garden is also influenced by her partner, fellow garden designer Phil Stray, and plantswoman Jane Dennithorne, who works with Kate two days a week and brings a love of historic plants, honed from more than a decade as head gardener at Jeanne Pratt’s mansion, Raheen.

The resultant range of plants is eclectic, exciting and skillfully arranged to offer interest in every season. 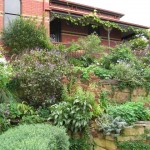 The borders tumble down the escarpment like a waterfall, spilling over stone retaining walls and splashing onto the paths, creating a flood of colour, foliage and texture, and slowing down only where the flow is broken by a sculpture here, a folly there, or to swirl around a calm, circular ‘pond’ of open space that serves as an alfresco coffee or lunch spot, mid-way down.

While she is a huge fan of native plants and has done a lot of revegetation work on the river flats, she’s not a ‘purist’. 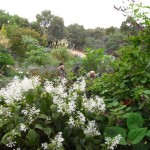 Borders tumble down the escarpment to the billabong and wetlands in the valley below.

“I’ve been through this love affair of exotics and perennials and, as an artist, I think I love colour first and of course form matters, but I think that my current passion for Australian plants is about the texture that you get from many of these mostly evergreen plants and the rewards of growing things that are so suitable for your garden.

“It’s not just Australian plants I’m passionate about – it’s plants that come from a similar climate to Melbourne’s, that aren’t weedy, that aren’t going to be a threat to our bushland, that provide form and colour and look good with the natives too, because I like to mix natives with exotics.

“I also love evergreen plants; you get the texture and colour and form that is there all year round – you don’t get that bare, nude look.”

“I’m loving the Beschornerias – the Mexican lily – at the moment,” she says, rattling off the Latin names with ease. “Especially [B.] tonelli and [B.] yuccoides, the grey-leafed one.

“Australian correas are also wonderful, and I’m pulling out weedy Euphorbia wulfenii and replacing with sterile ones, such as Euphorbia x martini.”

For the future, she wants to make the garden as sustainable as possible and hopes to incorporate some of the knowledge gained from studying a unit on sustainable farming and horticulture at TAFE last year: “I did a project on how to stop using roundup to maintain my reveg. areas  - more mulch and more plants is what I came up with; you pay more for labour and mulch and plants are $1 a tube, but I’m happier to do that.”

Her next garden project is to create an eight-bed vegie patch on the river flats that she will share with neighbours.

“I’ve got three neighbours going in with me so it will feed four households and I don’t have to do all the labour myself,” she explains, although after interviewing water-conscious TV gardener Josh Byrne, she is considering installing a new water tank.

“When you don’t get rain, you may need anywhere from 5-8 litres per square metre. For a 30 square-metre vegie garden that’s at least 150L a day, which is like having another person in the household.” 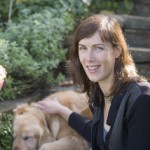 Kate’s first foray into gardening was as a teenager when her parents were “doing the hippy thing in late ’70s” in a controlled-living zone where cats and dogs were banned and the kids helped out at weeding working bees every month.

She has strong memories of her grandparents’ home in Ascot Vale where a “fake clam shell pond and white pebbles” were offset by magnificent, espaliered pear and apple trees, set against an asbestos garage.

“My first garden at about 16 was sort of permaculture-styled; I loved plants and I liked growing things but it wasn’t something I thought I’d do professionally.”

Her accident put an end to her finishing school but didn’t stop her learning.

“I spent six months in hospital and when I came out I didn’t know what I was going to do.” She settled on a plant identification course at Burnley – by correspondence – then took an Arts degree, finding work as a graphic artist.

“I’ve been working for myself since I was 16 and a half, which means I’m basically unemployable by anyone’s standards!,” she jokes.

“It’s nice I can now combine my graphic skills and love of gardening in designing gardens for other people.

“Plants are wonderful, and making people happy when you transform a bare mud pile into a garden is such a delight – meeting all those requirements people might have for function but making things beautiful as well.”

Her other talent is her interest in people, and this has found an outlet in her latest project – a coffee-table book on productive gardens, for which she interviewed 19 different gardeners across Australia, seeing what they grew and why.

“I really enjoyed those gardens that were so different to my own with different conditions and climates,” she reflects.

* Kate’s book, Kitchen Gardens of Australia, is published [2011] by Penguin. 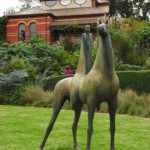 Shona Nunan's bronze statue 'The Journey' is a central feature on the lawn below the house.

Aspect: South-facing on escarpment of Yarra River in inner-city Melbourne

Dripline from 23,000L polytank for veggies;

Rain only for revegetation areas.

Compost: Garden produces about 25 m3 of green waste a year, which makes 6m3 of compost after being processed via a tractor-driven flail mulcher.